Audience members attending the open house sporting Birkenstocks and T-shirts maneuvered carefully around the grease on the floor of the RV mechanic’s garage. Carrying their purses, the audience fingered the sale clothes racks at the department store. 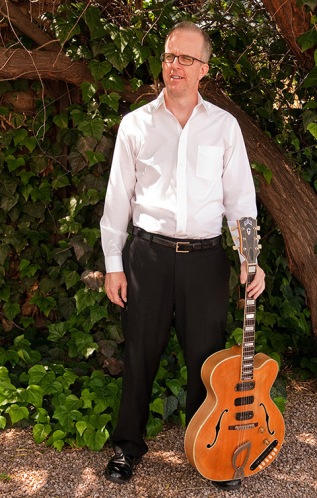 Dressed in ties, suit coats, and gowns, the audience listened carefully to the Pops Concert at the Tucson Music Hall. His fluency in diverse styles allows Matt Mitchell to carve out a successful career as a frequently seen guitarist in many venues of the Tucson music scene.

Matt’s musical journey began at age 7 in a visit to Aunt Mildred’s house. He picked out “On Top of Old Smokey” by ear on her electric piano. Following this success, he took piano lessons for 5 years, studying classical music. He discovered the guitar at 15 and was into pop, rock, and heavy metal for a brief period. Going into college, he returned to studying classical music on the guitar. Wisely, he learned to read music. This set him apart from many other guitarists who only play by ear or from those that learned ‘Tab’, a visual representation of the fret board that is an overly simple version of music.

Pause for a moment to hear Matt play Romanza.

For the year and a half before graduating from college, Matt was already making some income playing music. Once he graduated, he had to get a grasp on how to survive. He was very anxious but within a few months he was really psyched. He was making a living. He realized that if he just played one style, he had limited opportunities. He needed to diversify. First, he learned to play jazz.

There were many jazz artists that influenced him. Early on, he focused on guitar players like Joe Pass, a solo jazz guitarist who recorded a duo album with Ella Fitzgerald and played with a lot of famous jazz musicians like Count Basie, Dizzy Gillespie, Duke Ellington and Oscar Peterson. Django Reinhardt was a pioneering virtuoso jazz guitarist and composer who invented “hot” gypsy jazz. He was incredible both technically and musically. A few of the fingers on his left hand were burned which made it even more incredible that he overcame a handicap. That was very inspiring. Lenny Breau, an American living in Canada, blended many styles of music including jazz, country, classical, and flamenco guitar.

Matt improved and diversified his playing skills by listening. Listening is a huge part of how he plays; how he gets his ideas; what he wants to sound like. He listens to recordings of live concerts and goes to live concerts. He picks out what he enjoys and tries to emulate it. That gives him direction.

Continuing his drive to diversify, he dove into various types of world music such as klezmer, tango, and bossa nova. Matt joined the Klezmopolitans in 1995. They specialize in the danceable rhythms and soulful melodies of klezmer and Jewish music but also play jazz standards, classical, Eastern European and gypsy music. Matt really likes the music of the Balkans because some of it has odd meters. Most music is in 2 or 4 and some of it is in 3. But some Balkan music is in 7, 9. 11 – really odd time signatures. The ornamentation is tough to master. There are many tiny notes that are added to the main notes. The Guerilla Tangueros is a fusion of a band he started with Tango dancers. The combination has turned out great because so much music comes from dance – a merging of passions that he had lost with time.

Matt’s jazz style is distinctive from many other jazz artists. He tries to be melodic and lyrical rather than mimic the abstract, esoteric, and complicated style of others. At home, he sings what he is playing, aiming toward a melodic flow to try to bond to people more. Connecting with the audience is the main thing he wants to do. He knows when that connection is succeeding by watching the expressions and reactions – the smiling and clapping and listening and concentration of their faces. He views himself as an artist rather than an entertainer. An artist has a deep relationship with the music he is playing. He gives the audience that seriousness and that involvement. He sees entertainers as performers that pander to the audience. He does not want to be someone that takes their cues from the audience. He does what he feels inside and presents it to the audience.

music in the moment. Playing solo isn’t anywhere near as much fun as playing with other musicians. He delights in having the music sound the way he wants it to sound. But it can be rare for him to just be in that place where everything is coming out right and loving the way he is playing and sounding. He is happiest when he has achieved that. The lows are when he is working less and it is tough to make a living. Yet, he has never been too close to poverty and has always been able to pay for everything through his music.

The hardest part of performing is getting over nervousness and getting into that zone where he can express himself in a flowing way. It can be tough to get into that zone. He only feels nervous before special performances. The majority of his career is playing in the background at restaurants and corporate events. Very often there are not a lot of people paying attention to him. When he is in a concert situation, it gets more stressful because people are actually paying attention to his playing. But, it is a good opportunity to connect with somebody.

Currently, his regular gig is at the Club Congress brunch from 10:30 am to 1:30 pm with Hot Club. He plays a Django Reinhardt style of gypsy jazz as a duo with a violinist. He has a lot of good experiences at the Sunday jazz jam at Old Pueblo Grill run by Pete Swan for the last 11 years. He joins with the breadth of the jazz community from grade school kids learning jazz to old pros in their 70s. He plays with the Tucson Jazz Society in concerts at St. Phillips Plaza before hundreds of people.

In 5 years, Matt wants to be doing just what he is doing now. Making a living. Meeting new musicians and learning new styles of music. Career wise in Tucson, there is a certain ceiling but he is OK with that. He doesn’t aspire to be a national artist. His aspirations are musical. He is a single-minded person. It is music all day long for him.

Learn more about Matt Mitchell and his styles at http://www.mattmitchellguitar.com/.